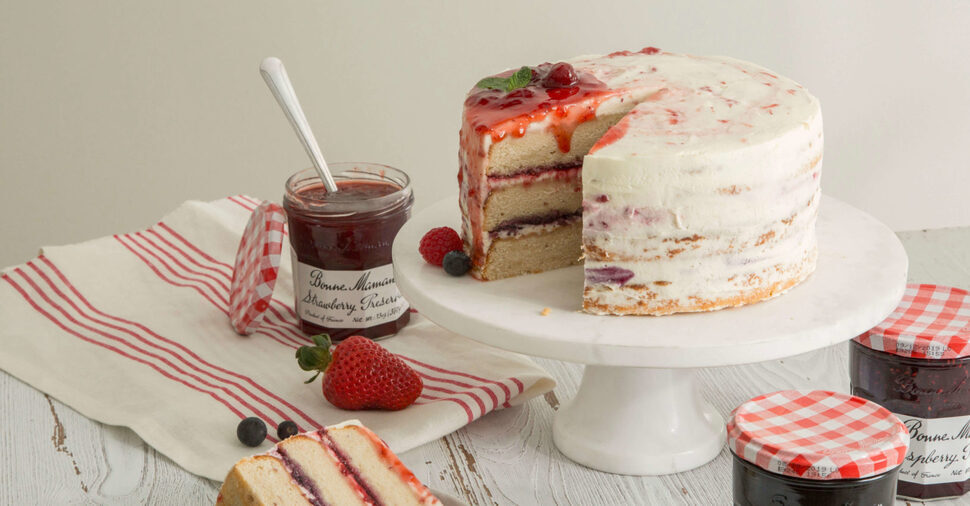 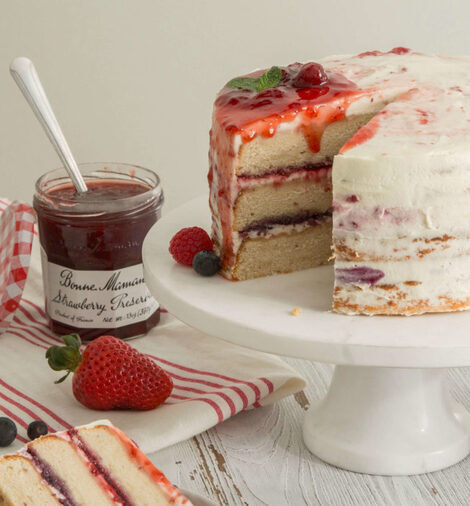 Preheat oven to 350˚F. Butter and flour four 8”cake pans and line the bottoms with parchment.

Note: If you will only be using two cake pans, thoroughly clean and dry pans prior to refilling and baking the final two cakes.In a medium bowl, whisk together flour, baking powder and salt. In a separate bowl, whisk to combine milk and strawberry preserves.

In the bowl of a stand mixer, cream butter until smooth. Beat in sugar until light and fluffy. Add in eggs one at a time, until combined. Beat in vanilla.

Add flour mixture in three parts alternating with milk mixture, beating well after each addition. Divide batter evenly between cake pans making sure they are leveled and bake for 20-25 minutes or until a toothpick inserted in the center comes out clean.

While the cakes bake, make the frosting. Attach wire whip to mixer and begin beating mascarpone, followed by vanilla then powdered sugar. Gradually add in whipping cream, beating until frosting is light and fluffy.

To assemble, level all the cake layers by cutting off the domed part with a serrated knife. They should mostly lay flat and be easy to stack. Place bottom cake layer on a serving plate or cake stand. Top with a thin layer of frosting, then the Bonne Maman Strawberry Preserves, spreading the preserves to the edge of the cake, but not too much—a little bit of preserves should meet the edge of the cake on each layer so that when the frosting is spread on the outside, it picks up a small amount of the preserves.