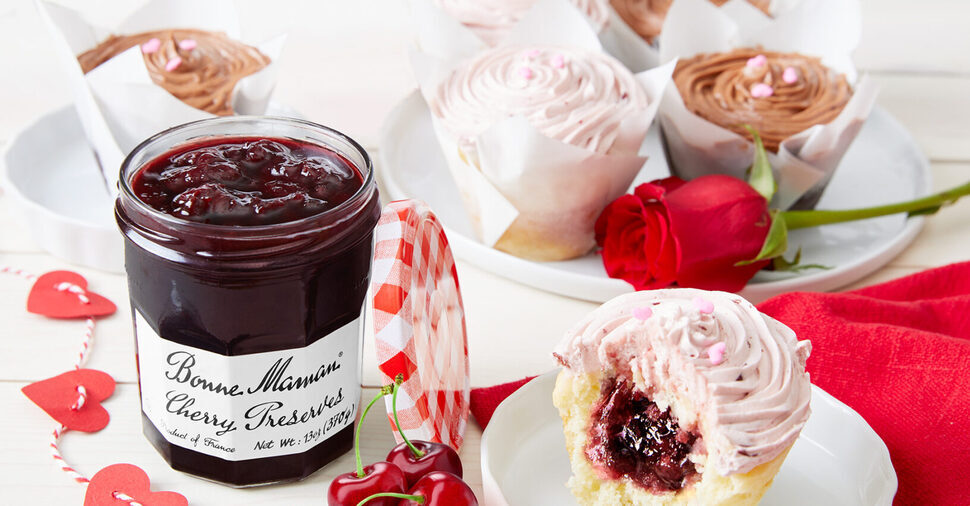 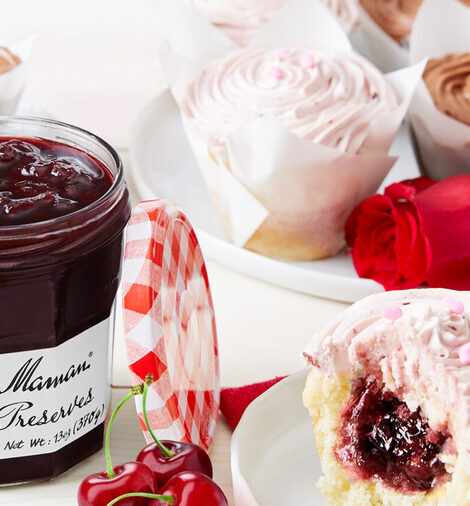 In the bowl of the stand mixer fitted with the paddle attachment, combine the cake flour, sugar, baking powder, and salt. Add the soft butter and mix until evenly distributed. Gradually add the whites and the egg and mix for about 1 minute, scraping the sides of the bowl down occasionally. Mix together the yogurt, vanilla, and almond extract. Fold about half of the yogurt mixture into the batter and mix to combine. Fold in the other half and mix to combine. Scoop a heaping 1/4 c into lined cupcake molds and bake for about 20-25 minutes until the cupcakes are starting to turn golden and a toothpick inserted into the center comes out clean.

Cool completely. Hollow out the center with an apple corer or a paring knife and fill with about 1 tbsp of Bonne Maman® Cherry Preserves. Top with white chocolate cherry buttercream.

For the Frosting: In a large heatproof bowl, combine the egg whites, sugar, salt, and vanilla. Place the bowl over a pot of boiling water and stir vigorously with a spatula until all of the sugar is dissolved and the egg whites feel very hot to the touch. Transfer the egg mixture to the bowl of a stand mixer fitted with a whisk and mix on medium-high speed until the mixture has cooled to room temperature and is thick and billowy. Gradually add the butter to the mixer and continue to mix on high until all of the butter is incorporated. At some point the buttercream will likely break and start to cool like ricotta cheese. Keep mixing until it comes back to a glossy smooth frosting. Switch to a paddle attachment and add the Cherry Preserves and then the melted chocolate.

Use within a few hours or hold at room temperature for up to a day. The buttercream will stiffen up as it sits, but will soften if you put it back in the mixer and mix it again with the paddle. If it breaks, warm the outside of the mixer bowl with a warm washcloth and continue to mix until it comes back together.