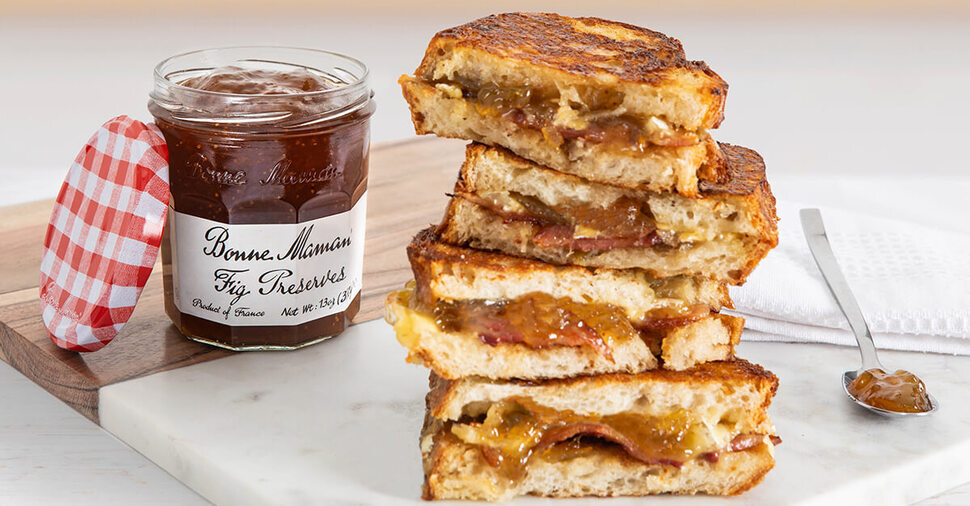 Creamy, luxurious brie (there’s no better fig and cheese pairing); crispy bacon; silky Bonne Maman Fig Preserves made from the best quality ripe and juicy figs; and your favorite type of bread. Alone, these ingredients shine. But grilled together, this ensemble of flavors becomes a thing of humble splendor! It’s one of the best recipes with figs you’re likely to find.

Cheese, bacon, jam and toast are a classic combination and this one, in particular, is all about contrast. There’s no need to complicate something that’s made with such finely balanced ingredients, so here’s how you go about perfecting a magnificent grilled brie, bacon and fig preserves sandwich. 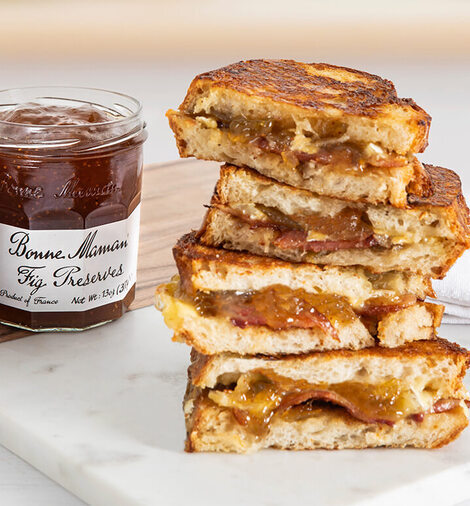 Line a baking sheet with foil and arrange the bacon slices in a single layer.

Bake the bacon in the oven for 15 to 20 minutes (turning once), or until your desired level of crispness.

Remove the bacon from the oven and lay on a plate lined with kitchen paper. Once cooled, cut each slice in half.

Divide the brie slices between the other four slices of bread, and top each with the cooled bacon. Create four sandwiches by putting the fig preserve-covered slices on top of the brie and bacon. Press down slightly to create a good seal.

Heat a cast-iron skillet over medium heat and melt a little butter. Add the sandwiches and cook for about 3 minutes or until golden brown. Then flip them over and cook for another 3 minutes. (You might have to do these in batches depending on the size of your skillet. You can also cook them under a grill, if you prefer this cooking method.)

Made Simply, With Love!

If you want to know what else to do with figs, you can explore our special selection of homemade recipes, where you’ll find a host of fig recipe ideas, as well as other delicious ideas that feature your favorite Bonne Maman products. With more than 25 preserves, jellies, curds, and spreads, you can’t go wrong with Bonne Maman.